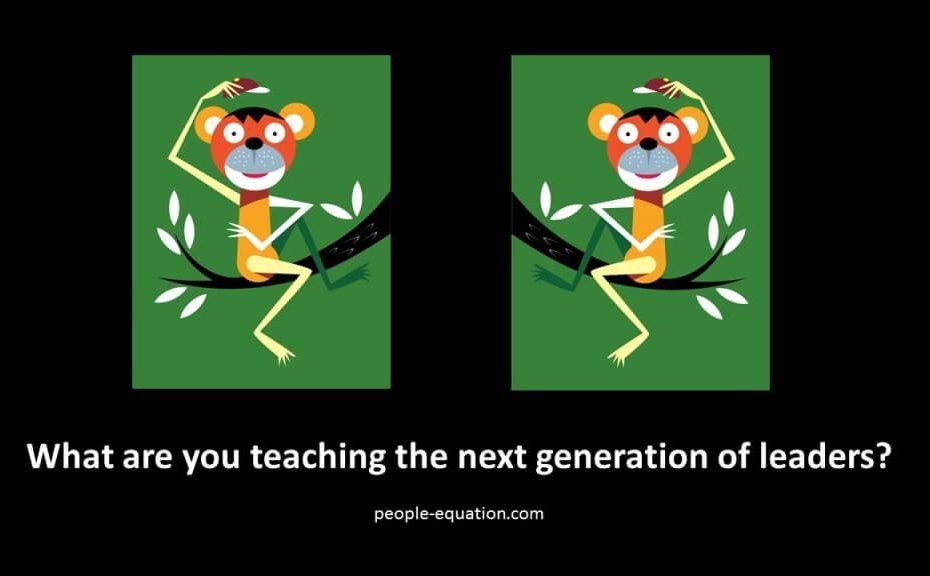 What determines if a newly promoted leader will be successful? Of course, there are many factors. One consistent element I’ve observed in my leadership development role is this: new leaders often emulate their bosses. And this may be a good thing, or a bad thing, depending on the example the more seasoned leaders provide.

Consider this social experiment conducted by author Daniel Pink for his TV show Crowd Control, as reported on the blog Barking Up the Wrong Tree . Pink and his team painted two lanes on a sidewalk, one for people talking on their cell phones, the other for non-cell-phone users. Then he positioned actors as “lane guides” that told people where to walk, based on their cell phone usage. You can probably imagine how well that went over: not very. People were highly resistant to being told where to walk. A simple change-up in the process had a shocking result: when the actors simply posed as “regular people” and walked in the “correct” lanes based on their cell phone usage, people fell in line and began following the arbitrary sidewalk rules.

Pinks’ analysis: if you model the way, people will often follow.

Of course, “model the way” isn’t new. It’s one of Kouzes and Posner’s five leadership practices as outlined in their book The Leadership Challenge. It seems intuitive, doesn’t it? Being a role model is inherently “baked into” the role of leadership.

As Pink’s experiment showed, lane guides could reduce the level of “threat” the people felt when simply modeling the behavior they wanted to see rather than acting as rule enforcers.

[RELATED: Leaders as Role Models – What the Research Tells Us]

So if being a positive role model will lead to a leader’s desired outcomes, then why do we still have so many managers demonstrating behaviors that are counter to the positive values they espouse?

I think there’s a sort of trickle-down effect. People enact what they know. It’s the old “monkey see, monkey do” effect. So, the “people equation” of newly promoted managers looks something like this:

And research bears this out: Researchers from the University of Florida and University of Nevada studied the effects of a leader’s toxic behavior on a newly established supervisor. They published their findings in the Journal of Applied Psychology, which found that in certain circumstances, a new supervisor felt it was acceptable to model their boss’s abusive behavior.

The reverse is true as well: if you learned early in your career from a manager who modeled mostly positive traits, you are more likely to carry those practices forward. While there’s certainly something to be said for learning from a bad manager, those “non-examples” must be balanced out with positive role models. Or else the cycle just perpetuates itself.

The Take-Aways for Newly Promoted Leaders

If you don’t have the best role models to emulate, take heart. If you aspire to a leadership role and are in the unfortunate situation of being surrounded by “bad actor” leaders, be sure to seek out more positive role models. Just because you see them behaving badly doesn’t mean you have to do so as well. Here are a few leadership articles regarding role models to put you on the path to being a fantastic role model: